The efforts of pediatrician Nadine Burke Harris to address of trauma experienced early in life have vaulted her to national attention.

In September, Burke Harris earned recognition from the Heinz Foundation for her work to establish a system to screen and treat children who are dealing with toxic stress and adverse childhood experiences (ACEs), such as abuse, neglect, poverty and violence. The annual Heinz Award honors five “exceptional Americans, for their creativity and determination in finding solutions to critical issues.” The prestigious Heinz Award for the Human Condition comes with a $250,000 prize.

Recently profiled by the Washington Post, Burke Harris was recognized for her work at the San Francisco-based Center for Youth Wellness (CYW). There, she has worked to address the needs of families in the low-income neighborhood of Bayview-Hunters Point by using the emerging understanding of the impact of ACEs on lifelong health outcomes. 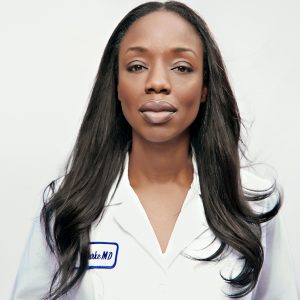 But Burke Harris has also struck a leading advocacy position that extends past the Bay Area in California. She pioneered the development and use of a universal tool to screen children for childhood trauma that has been downloaded from the CYW website more than 1,100 times over the past 13 months. Burke Harris also recently spoke about childhood trauma at a White House convening about school-discipline reform in September.

She has also struck a chord with the broader public, thanks to a September 2014 Ted Talk entitled, “How childhood trauma affects health across a lifetime,” which  has been viewed nearly 2.4 million times and led to her selection as the keynote speaker for the 2015 American Academy of Pediatricians’ national conference.

Burke Harris has continued to spread the word about the impact of ACEs through a biannual conference, sponsored by the CYW. At the most recent conference — held last month in San Francisco — Burke Harris spoke with The Imprint about the growing clout of the ACEs movement, her changing role and more.

The Imprint: This marks the second conference around ACEs, which has drawn folks from around the country in several different fields. What’s different about this year’s gathering?

Nadine Burke Harris: Two years ago in 2014, when we did our first conference, I would go around the country and talk and be invited places, and I was just like, “California needs to have a conference on adverse childhood experiences! And we need to create that.”

At our first conference in 2014, it really was about sounding the alarm and raising awareness and bringing folks together. And we had about I think between 200 and 250 folks that came together.

This year, we got to 500 people, and we had a waitlist of 150 more people. We had to close registration, so the response has been amazing. The focus of this conference is moving from awareness to action. So our goal is to facilitate the movement by creating connections, by giving folks knowledge and tools, and by giving them a little bit of inspiration.

CSC: As a practitioner as well as someone who has spoken widely about ACEs, has the growing awareness of ACEs changed the way you see your role?

NBH: I do feel like my role is changing and it’s really exciting. I’m having a ton of fun with it because I think that – the work of the movement for me has really paralleled the work of the development of the Center for Youth Wellness. When I came in, I was a little bit like head cook and bottle washer, where I was our research department, our PR department, our whatever. And similarly, what I’m seeing in the movement is really a parallel, too.

I think the role I see for myself more and more is to try to continue to dream big. To try to bring people together and galvanize folks to action, and get the resources – get those resources, because that’s the big thing that we need, is a huge next step, is opening up the resources that is going to support this movement.

CSC: What is it going to take — politically, culturally and economically — for elected officials to be able to make a greater investment in responding to the health challenge posed by childhood trauma?

NBH: What we need to see now is direction of resources at every level. At the city and county level, at the state level, and at the federal level – investing in number one: raising awareness and public education. Because through public education, we can do prevention.

There are still – despite the wonderful experience I had at the White House – there are still a lot of folks day-to-day who don’t know, who don’t understand, how dramatically early adversity affects health and wellbeing across a lifetime. So we need public education. We need to support the infrastructure for early identification and effective treatment, and we need to put resources into advancing the research so that we can catalyze, step-wise, advancements in treatment.

I think a lot of times we think that the politicians are going to do this, and we do need to get our political leaders on board, but I believe the leadership is going to come from us. Really, there is a groundswell of demand for services that are able to effectively detect and address these issues. I think political will comes from all of us, from the constituency, you know?

CSC: In the past couple years, a couple high-profile studies have found genetic evidence for the way that trauma has been passed down from one generation to the next. What kind of challenge do these findings present for your work? Do your worry that the cross-generational genetic changes as a result of trauma suggest that related health outcomes may be something like destiny for some people?

NBH: No and, in fact, epigenetics is actually the opposite of destiny because what we find is that some of these epigenetic changes are reversible with intervention.

I think that there are huge opportunities for us to develop new targets for intervention. And at the same time, we don’t have to wait. We know there are things that work now, and I was talking about the six things: sleep, nutrition, exercise, mindfulness, mental health and healthy relationships. Those are things that have demonstrated impact on our epigenetic regulation, so I think that the science is very promising, but at the same time there’s plenty that we can do right now.

This interview has been condensed for clarity and length.