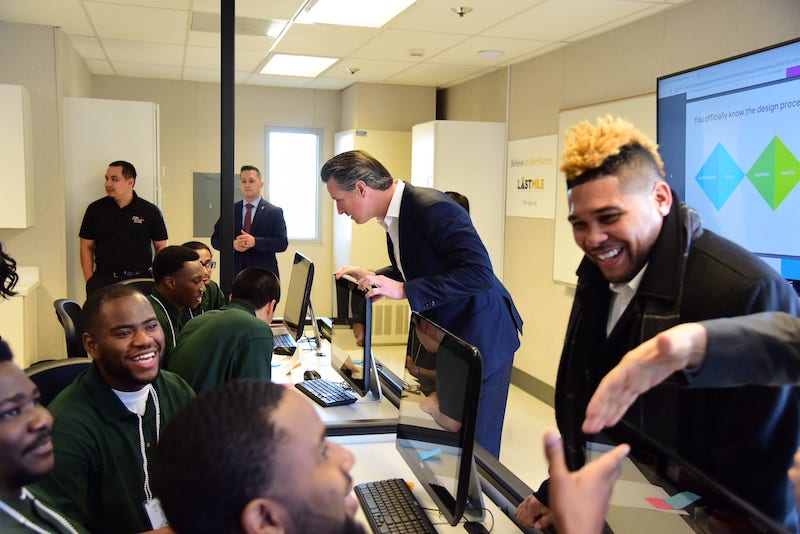 California Gov. Gavin Newsom (D) visits the O.H. Close Youth Correctional Facility in Stockton, Calif., in January of 2019. In his most recent budget, Newsom proposed to close Close and the other three state-run juvenile facilities. Photo courtesy of the Office of the Governor.

California Gov. Gavin Newsom’s plan announced in May to close the state’s three juvenile prisons and one camp that house 800 young people has been put on hold until at least later this summer.

As part of the budget that will take effect on July 1, Newsom proposed turning over to counties the responsibility for the care and custody of California’s most serious juvenile offenders, as well as the funds to pay for it.

But viewing the change as rushed, key Democratic legislators blocked the shift, at least for now. And county probation officials who would become responsible warned of “the potential for relative chaos.”

State Sen. Nancy Skinner, a Berkeley Democrat who chairs the Senate Public Safety Committee, said she intends to hold an oversight hearing but also expects that the Legislature will vote on the proposal by the Aug. 31 close of the legislative session.

“We want to look into what is the right way to do this,” Skinner said in an interview with The Imprint. The question, she said, is not “whether” the Division of Juvenile Justice will be shuttered. “It’s how.”

Once called the California Youth Authority, the agency in the 1990s operated 11 institutions and four firefighting camps, and housed more than 7,500 of the state’s youngest offenders. In the 1990s, its mission changed from one of rehabilitation to one of punishment. Too often, it involved brutality, with young people locked in cages for school and recreation and held in solitary confinement for 23 hours a day.

The Prison Law Office, a Berkeley-based legal aid organization, sued the state over conditions in the prisons. That suit and others, as well as news accounts and oversight by legislators, prompted attempts at overhaul by former Govs. Arnold Schwarzenegger (R) and Jerry Brown (D).

In 2007, a new state law limited the scope of the state’s remaining juvenile facilities by only permitting counties to send serious violent offenders there. Four years later, facing a $27 billion deficit and with costs per juvenile inmate topping more than $200,000 a year, Brown proposed closing all of the youth prisons and shifting the responsibility to counties, not unlike what Newsom proposed in May.

Newsom’s vision evolved. In January of 2019, Newsom proposed abolishing the Division of Juvenile Justice, which is part of the California Department of Corrections and Rehabilitation, and moving the responsibility to the Health and Human Services Agency.

The newly created Department of Youth and Community Restoration under HHSA was set to have a staff of 1,416, a budget of $290 million, and a focus on a “rehabilitative mission” with “trauma-informed and developmentally appropriate services.”

Then the COVID-19 pandemic struck, shutting down much of the economy and transforming what had been a $20 billion budget surplus into a $54 billion deficit.

In his May revision to the budget, Newsom abandoned that plan and called for an end to the state youth prison system altogether, shifting the responsibility for even the more serious and violent offenders to local probation departments.

“Closing state juvenile facilities and directing a portion of the state savings to county probation departments will enable youth to remain in their communities and stay close to their families to support rehabilitation,” Newsom’s May budget document states.

The budget proposal noted that some of the juveniles in the state system “have sex behavior treatment or mental health treatment needs” and promised $9.6 million a year, to be awarded to county probation departments that would treat those individuals.

Karen Pank, director of Chief Probation Officers of California, issued a statement suggesting the officers would support shuttering the Division of Juvenile Justice. But Pank, whose organization is pushing to include 18- and 19-year-olds in the juvenile justice system, also raised questions.

“As currently crafted,” she said, “the closure of DJJ brings the potential for relative chaos for youth who often come into the system due to a life of chaos. It’s destabilizing not just to the youth we serve but detrimental to the entire juvenile system. There must be stability to effectuate reform and meet the needs of youth in a compassionate, trauma-informed and health focused way.”

Even some juvenile justice advocates have concerns about the closure. If there are no alternative secure housing facilities for the most serious and violent youthful offenders, prosecutors could try more teens as adults and, if convicted, those juveniles would end up in adult prisons.

Pank said county probation chiefs would assist the governor and Legislature “to quickly plan and implement the best way to meet the needs of youth, keeping them out of the adult system and continuing to effectively evolve juvenile justice.”

Lee Seale, Sacramento County chief probation officer, said in an interview that the concept seems solid, though the details are lacking. No matter their offenses, Seale said, kids and young adults need to remain connected to their families, teachers, coaches and churches.

“You cannot do that in a remote Central Valley prison,” Seale said.

Still, one overriding issue remains: How much will the state spend to help counties provide the service, and will the funding be locked in?

“To do it right, it is expensive,” Seale said. “If you try to do it cheap, … there is no hope for rehabilitation.”

Dan Morain is the Youth Justice Reporting Fellow for The Imprint. He can be reached at [email protected], @danielmorain.