A Snapshot: My Time With Syria’s Youngest Refugees

As the daughter of two generations of refugees, I am well aware that there is always a personal story.

My recent journeys to Jordan and Greece to meet some of the people who have been forced from their homes in the largest wave of migration to sweep Europe since the Second World War reignited my intense interest in hearing their narratives.

When I focus my camera on someone, my mind follows where my eye journeyed. The standard shutter speed of 1/125th of a second activates my curiosity; who is that person, and what is their story? The proliferation of life vests accumulating in landfills on the Greek island of Lesbos begs the obvious question: what happened to each person?

Meeting children who have been part of the human escape is incrementally harder emotionally. The young ones are bewildered, scared, hungry, tired, cold and bored. The older ones help with the younger ones and worry about futures that have been put on hold. That is what I saw of the children with family members. The EU’s criminal intelligence agency reports that more than 10,000 children are unaccounted for and have “disappeared.” 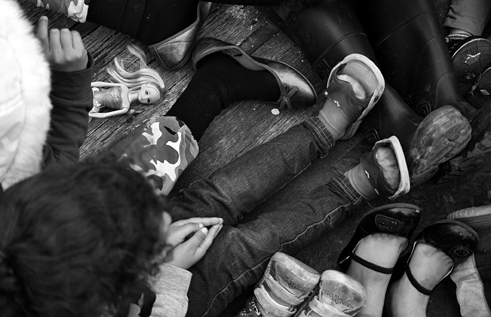 It is not known if they are safe but undocumented, dead or victims of human trafficking.

In the Piraeus parking lot in Athens, now home to thousands of refugees living in tents, Yana, a 6-year-old Syrian, plays on the weathered, splintered wood of a flatbed truck with her sister and other little girls. There is little for them to play with and the few stuffed animals and one Barbie seem to be more important than is usual for young girls. Her constant sniffling cannot be ignored, nor can her dirty hands, face, clothing, and shoes that are far too big for her feet. In the waters behind the rusted and treacherous truck sits a luxury cruise liner waiting to go on to its next port of call.

Salam, a beautiful 19-year-old Syrian girl with sparkling eyes and an engaging smile, sits on a blanket inside the Piraeus terminal with her sister, her sister’s baby, Abuzza, and her cousin. Her mother stayed behind in their small Syrian town to tend to their ailing father. Salam explains in her broken English that she was studying to be a doctor because she wanted to help people. As she guides us through the maze of too many families on too many blankets, it seems that she is trying to help everyone. Mohammed is a 21-year-old Syrian who was studying to be a veterinarian. He and his family paid smugglers to bring them to Greece by boat. The photos on his smartphone portray joyous family gatherings and the births of his niece and nephew.

On a frigid night at the Moria refugee camp on Lesbos, Mohammed sings to his friends, other Syrian, Iraqi, Afghan refugees, and a few European and American volunteers. His voice, a bit raspy from a lingering cough, is still strong, typifying the sentiment of unity and passion running through the camp. While the song was in Arabic, a foreign language to many in the crowd, we all seem to grasp the meaning, which makes us tearful and compels us to sing and dance.

Ammar, a scared 5-year-old from Syria, is having his last meal with his parents at Damas Restaurant in Mytilene, the port capital of Lesbos, before getting on the ferry to Athens. The flashlight and balloon gifts are momentary distractions. His loving parents struggle to smile for his benefit. On the floor are all their worldly possessions stuffed in to three knapsacks and two duffle bags. Ammar’s mother, Samar, speaks English, and we discuss the lack of U.S. participation in solving the human and moral crisis. Ammar and his family on their way to the Athens Ferry, Lesbos, Greece. Photo: Emily Scott Pottruck

We walk together, in the cold, to the ferry terminal. As we get closer and as we tearfully hug goodbye, a few glaring men stand nearby and ask my new family about me. Samar holds my hand a little tighter and states that I share their perspective, which pacifies the men.

Ammar and his parents are anxious and hopeful as they join the long line of people waiting outside for the ferry while the heated terminal waiting room remains unoccupied.

It was the perfect metaphor for what is happening globally: people standing in a cold, barren place waiting for the warm welcome of a new and safe community.