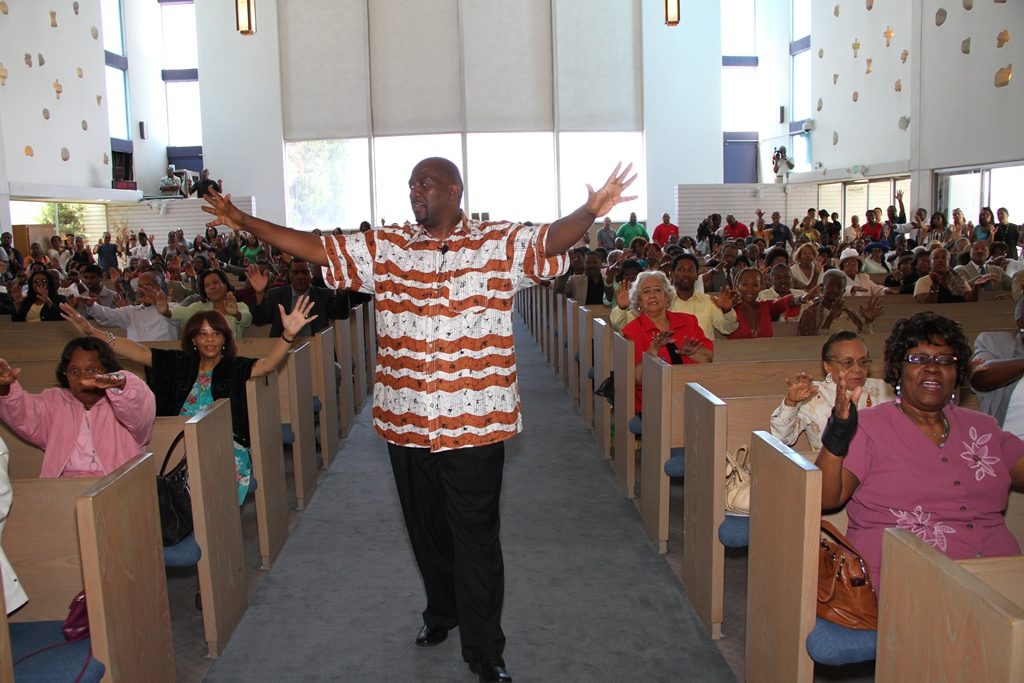 At Holman United Methodist Church in South Los Angeles, Pastor Kelvin Sauls and the church’s congregants have for years positioned themselves to help young people in foster care.

The help has come in many forms, including serving Thanksgiving dinners and furnishing an apartment for transition-age foster youth, said Pastor Sauls.

Now DCFS and other county leaders are hoping congregants at Holman and other houses of worship will take that support into their own homes. They hope more congregants can step up to the task of caring for children who have been removed from their family’s home due to abuse and neglect.

L.A. County, like most counties across the state, is facing a serious foster parent recruitment crisis. The county lost more than 50 percent of its foster homes between 2005 and 2015, according to DCFS data.

On top of that, California is now rolling out the ambitious overhaul of its foster care system that aims to decrease reliance on group homes for children and youth in foster care. Under the state’s Continuum of Care Reform (CCR), counties already struggling to identify foster homes will need to find even more of them.

In L.A. County, the search for more foster homes has led to a push for more engagement with more of the county’s faith communities, including churches, mosques, synagogues and other houses of worship.

Faith communities are robust sources of foster homes in many parts of the country, said Shelly Radic, president of Project 1.27, a Christian foster parenting and adoption program headquartered in Colorado that helps churches train and support fostering and adoptive families.

One success story can be found in Arizona, where Arizona 1.27, an affiliate of Project 1.27, has generated hundreds of foster homes through its network of churches, Radic said.

“People who are involved in a faith community, whether it’s the Christian faith community or another faith, tend to have a community where they support each other and care for each other,” Radic said. “And that’s also a great benefit to a family that fosters.” In South L.A., Sauls embraces the idea of finding more foster parents among his congregation. Sitting in a conference room at the Holman church, the topic led him right into a flurry of rhetorical questions.

Sauls said he sees the faith community as a group that can “stand in the gap between a foster child in need of a foster family and [DCFS].”

He is not aware of how many foster families are part of Holman United Methodist Church. During his five years as pastor, the church has never surveyed families to find out how many are fostering.

And he does not ask the congregants directly whether they foster because of the stigma attached and the discomfort it might cause foster youth.

Nancy Harris, the executive director of Holman Community Development Corporation, which is the church’s nonprofit set up to serve the South L.A. community, has been calling up leaders at South L.A. churches and asking about their activities related to foster care.

She has determined that while many parishioners want to get involved, DCFS and the faith community have sometimes lacked a formalized structure for working together to find foster parents.

“It’s been hit and miss,” Harris said. “There has been no formal program that the county of L.A.’s Department of Children and Family Services has put together around rallying the faith community to support foster care.”

In Riverside County, Faith in Motion, a faith-based collaborative started by the Riverside County’s Children’s Services Division, has connected churches and other places of worship with children in the foster care system. The model has also spread to Orange and San Bernardino counties nearby. L.A. County does not have a chapter of Faith in Motion. However, Glendale, a city in northern Los Angeles County, is home to another nonprofit with a similar mission called the Child SHARE Program.

Now L.A. County leaders and faith community leaders are trying to bridge the gap. On June 3, L.A. County is hosting a resource fair for potential foster parents at Center of Hope, a church in Inglewood about six miles south of Holman.

DCFS is holding the event with the Center for Strategic Public-Private Partnerships, a group within the county’s experimental Office of Child Protection that seeks ways to partner with the county’s philanthropic community. The event was made possible by funding from the Foster Parent Recruitment, Retention and Support (FPRRS) fund, which provides counties across the state with money to recruit foster families so they can meet the demands for more foster parents under CCR.

Organizers of the event aim to help prospective foster parents get information and quickly complete several steps of the registration process to become foster parents, such as getting fingerprinted and signing up for training. The idea is similar to health fairs that let people access different kinds of health screenings and information.

Predominately black churches like Holman and Center of Hope make up a large part of that region’s faith community, so staff members of both churches served on the event’s planning committee. The event also offers an opportunity to partner with DCFS, despite wariness from some church-goers in South L.A.

The high rates of removal by DCFS in the communities of South L.A. has sometimes compounded a mistrust that already exists and may prevent families from volunteering to foster.

“There’s always been an inherent mistrust around communities of color and governmental institutions, and part of that is of course the history of this country,” Sauls said. “The United States has engaged since its inception in the removal of children and families, especially children of color.”

Sauls said his approach to both child protective services is that it is better to engage with the leaders of those agencies and advocate for policy changes than to disconnect from them.

“So part of what we’re going to be doing through this event at Center of Hope is really to invite the faith community to engage with them,” Sauls said. “Get to know the department and their staff.”

Sauls said collaborating with L.A. County is a long-term strategy that he hopes will yield more foster homes, not only from churches, but across the gamut of faiths in the region.

“What we are doing at the Center of Hope is the first step,” Sauls said. “Our hope is that it will be catalytic in terms of setting in motion some opportunities for us to continue to build, and see how the faith community can indeed live up to their call to stand in the gap.”