Detaining Status Offenders is a Consequence without Understanding Growing up, I missed zero days of school from kindergarten to graduation. Zero unexcused absences and zero unexcused tardies. My brother, on the other hand, was the exact opposite, often having a phantom “stomach ache” right before we had to walk to the bus stop. Now, it is widely accepted that going to school is important and a kid should not just skip, but it should also be widely accepted that missing school should not be a situation that calls in the police and the courts.

My brother’s “stomach ache,” while not the right thing to do, was definitely not criminal. Furthermore, for much of a kid’s scholarly career (age 5-18) they can only be completely responsible for their transportation to school a small percentage of that time (age 16.5-18). 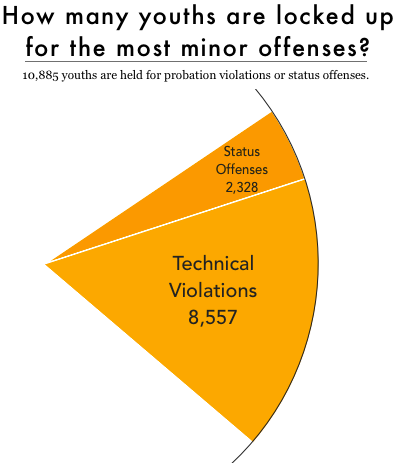 In Kentucky, and across the country, kids are being brought into court on these types of charges, introducing them to a maze of a system that is often challenging to exit. A recent report says that nationally, on any given day, nearly 53,000 youth are held in facilities away from home with many there for non-violent, low-level offenses, that may not even be considered a crime for an adult.

For example, a kid who is late getting to school can become a habitual truant, which is considered a status offense. That same kid could then be given stipulations, like making A’s and B’s as mandated by the judge that, if violated, could mean a return to court and possible detention in a facility. As you can see in the chart to the right, these violations of court orders and other technical violations of court-mandated actions are a large driver of our detention rates.

In Kentucky, our numbers are comparable to the national trend with numbers that, while improving, also underscore the need for even more changes and improvement. For example, of those 3,664 children booked into secure detention facilities in 2016, 495 (13.5 percent) were booked for a status offense and 1,101 (30 percent) were booked for violations, such as violating court orders or probation. That means more than four in 10 kids are locked up for offenses that are not a serious risk to the safety of others.

Overall, 2016 data shows that nearly two-thirds of bookings were for non-felony offenses, meaning for every 10 children who are in secure detention, more than six of them are there for a lower-level offense. For the bulk of these offenses, detention is not the answer but could serve as an inhibitor to future success. Detention, especially for these types of offenses, does not address the root cause for the behavior of the kid. Locking up a kid who skipped school and failed to get good grades as a condition of the court does nothing by way of safety. In fact, by detaining these kids, we place them in a cycle that is hard to escape and increase the likelihood of future criminal activity.

This is a national trend that is desperately impacting Kentucky and we should build on past positive reforms, starting with ending the incarceration of youth for status offenses, like truancy and running away from home, and how we handle low-level offenses. In crafting future creative solutions that are good for all kids, consideration also must be given to the instances at which the application of past reforms has disparately impacted youth of color.

Thinking back to the same kid, the habitual truant, what if the reason he is late so often is his single parent works two jobs and sometimes is late getting home to take him to school on time? Should his future trajectory be changed because of that fact? Sometimes the solution can be as straightforward as asking the child what is going on and showing that you care can help identify the root cause to the issue without enacting measures that negatively impact a child’s future.

Juvenile justice departments will get better results for kids and ultimately safer communities if we get to the heart of the problem and place less priority on solutions that simply serve to offer a consequence without a deeper understanding of the cause.

While I am not 100 percent sure where my brother’s aches came from, I do know these instances were more pronounced during one specific semester, and when the semester changed, and he had different classes, the problem subsided. It was just too bad no one thought to ask him when it was going on. Let’s ensure Kentucky kids have an adult in their life taking time to ask what’s going on and how they can help.