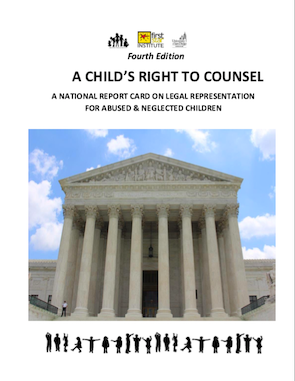 There is much work left to do, but the number of states that fail to legally support children in child welfare cases has significantly declined in the past decade.

These are the findings of the fourth iteration of A Child’s Right to Counsel, the periodic national report card on counsel for children published in partnership with the First Star Institute and the Children’s Advocacy Institute (CAI).

Nineteen states received an A on this report card. Overall, 31 states have improved in grade since the original publication.

The report was released the same day as a Congressional briefing on right to counsel in child welfare.

“We are closer than ever to achieving a national right to counsel for dependent children, but we’re not there yet,” said Amy Harfeld, national policy director for CAI, in an e-mail to The Imprint before the briefing. “The remaining gap is up to the dozen or so ‘D’ and ‘F’ states as well as Congress and the federal courts to close.”

The two producers of the report, along with other legal advocates for youth in care, have called for a federal requirement of legal counsel for all children as part of the current reauthorization of the Child Abuse Prevention and Treatment Act (CAPTA). Currently, CAPTA only requires that somebody represent a child in court; it doesn’t have to be a lawyer.

The requirement was not included in a CAPTA bill currently moving through the House of Representatives. The Senate has yet to produce a reauthorization bill.

But the report card does follow another major victory for legal advocates. At the end of last year, through a change in the federal Amy Harfeld, Children’s Advocacy Institute: “We are closer than ever to achieving a national right to counsel for dependent children, but we’re not there yet.” Photo courtesy of National Association of Counsel for Children

Child Welfare Policy Manual, the Department of Health and Human Services (HHS) said that states could now seek a federal match through the Title IV-E entitlement for legal fees of indigent parents and children. That entitlement serves as the primary source of federal funding for foster care and adoption, and will soon be expanded to include services aimed at certain family preservation efforts.

Before the change, the agency had expressly prohibited states from claiming funds for such fees, but permitted federal funds for the child welfare agency’s lawyers.

“This federal funding change is a victory for children, advocates and states seeking to assure basic civil and due process rights of abused and neglected children and provides clear opportunities for state action,” the report said. “First Star Institute and the Children’s Advocacy Institute call on all to move forward in ensuring that quality legal representation is provided to all abused and neglected children.”

The report sets grades using a slate of six criteria:

First Star Vice President Noy Davis said the gains made by states since 2012 have been evenly distributed among those criteria, and that no single factor stood out from the rest. She said a stronger embrace of client-directed legal counsel for youth older than 7 – which is recommended in the model standards crafted by the American Bar Association – should be a priority for states.

“For us, that particular model is very important because kids sometimes just aren’t listened to and they have very important info to convey,” said Davis. “At the briefing today, we had a former foster youth who is now an advocate, who spoke from his experience about being abused in care and not having had his lawyer listen to him.”