The Summit, a residence at Queens College, New York City, where many foster youth in the Dorm Project reside. They were asked to move out within 48 hours on March 24, 2020, in response to pandemic-related closures statewide.

Yesterday, with New York City under “stay at home” pandemic orders, a group of foster youth who attend the city’s public colleges were directed via email to vacate their dorms within 48 hours.

The notices came after weeks of assurances from staff that students would be able to remain safely isolated in residence halls during New York’s escalating coronavirus crisis. The abrupt change left the group – college students who belong to the city’s Dorm Project program for foster youth – frantically seeking a place to stay as the region ground to a halt. The city’s child welfare agency said it had already found homes for most Dorm Project participants, but several who spoke to The Imprint said they were offered unsafe or unstable choices.

“They say if you are not 100 percent homeless you can’t stay. I’m staying with family friends, but sleeping on the couch,” said Jessica, a sophomore who is a culinary arts major at LaGuardia College. “What I’m hearing from my caseworker is that I should find numbers for family friends where I can stay temporarily. Or, she’s looking for foster homes for me, because I’m under 21.”

“The fact that it’s an emergency about saving lives – that’s fine. But there are students who have nowhere to go. Maybe 10 I know of.”

Jessica and other young adults who contacted The Imprint requested their last names be withheld. Others requested full anonymity, some fearing retribution from foster parents or foster care staff.

Other young people are weighing more difficult options. One fine arts major in the Dorm Project said her choice was between a relative who had exploited her financially; foster parents who have threatened to kick her out; or a group home where she had to fight other residents for soap. The 23-year-old said she doesn’t want to be back in a stranger’s foster home. 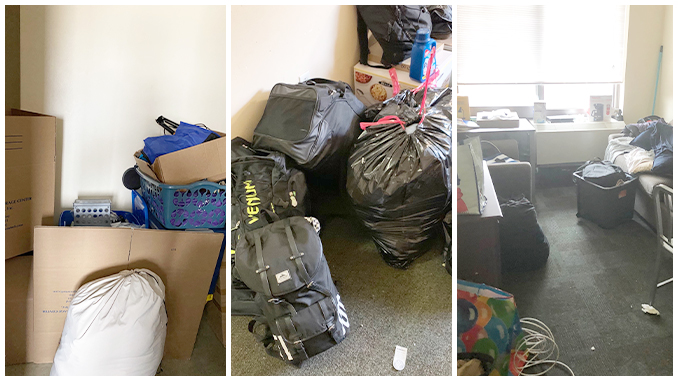 “[Dorm Project] staff would keep telling me ‘it’s gonna be fine, you’ll get to stay.’ [Then] they told us yesterday international students needed our rooms. But I don’t have anywhere to go either,” said the fine arts major. “Foster youth already faced so much trauma. They could have warned us to prepare two weeks ago. There’s some list for which of us can stay, and I’m not on it. They won’t tell me why. I don’t even know which borough I’ll be living in tomorrow.”

The Dorm Project, a city-funded program managed by the nonprofit New York Foundling, guarantees participants a dedicated, year-round dorm, tutoring, and stipends. The program has received positive recognition for improving some outcomes for a population that is often left unprepared for higher education, and that graduates at lower rates.

“As a result of the closure of CUNY residence halls, CUNY has arranged for the Summit Apartments to serve as the residence halls for CUNY students, including international students, who do not have a place to where they can move quickly,” read an apologetic letter from Queens College’s interim president, William Tramontano, sent this evening to residents of one building in Flushing where Dorm Project students had been living. “Governor Cuomo has stated that college dormitories must be made available to expand the number of hospital beds available by more than 29,000.”

Chanel, who has been in foster care since age 11, and started studying liberal arts this semester at the Borough of Manhattan Community College, thought she was headed for her old group home last night. “I’m in college, so going back to the group home is like 20 steps back. What am I supposed to do?”

Just before press-time tonight, Chanel updated The Imprint that she’d been told – after her vigorous protests today – she could stay in her Queens College residence. Other youth who echoed her concerns are still being moved against their wishes.

“These kids are being put in a really difficult position,” said Dawne Mitchell, attorney-in-charge for Legal Aid Society’s Juvenile Rights Practice, which represents children in New York City foster care. “They are still the most vulnerable kids, who have achieved the opportunity to be in college, the opportunity to be independent. But they still need support, and cutting off the Dorm Project can be life altering to many of them.”

This afternoon, students in three residence halls were rushing to shove their belongings into bags and boxes, according to students and foster care agency staff on site.

“Expecting the kids to find storage to move their own items, and then to be reimbursed doesn’t make sense in an emergency. These kids should have been handed a voucher,” Mitchell said. She added that Dorm Project residents should reach out to their court-appointed lawyers for guidance.

The email order to foster youth from Dorm Project administrators yesterday prompted tears and panic, according to eight students who spoke to The Imprint.

Brianna, a business accounting major, said she had just gone to a Key Foods for a quarantine stockpile of chicken, ham, hot pockets, soups, hot and spicy noodles, cans of corn and string beans, hot chocolate and seasoning, and other items. After seeing the email to leave her dorm, she began considering bartering the haul with relatives in exchange for living accommodations.

“I’m trying to go to family members’ houses who don’t have food yet. Sometimes they don’t have anything,” she said with a laugh, speaking between runs to the laundry machines in her Queens College residence.

After continued protests today, Brianna says she was told this evening she could stay in her Queens dorm after all. She said she got more assistance than some peers, because of a professional coach she gets through the foster care agency Graham Windham.

Sources said some foster care agencies like JCCA and Forestdale were providing moving assistance to their youth in the Dorm Project, while others were not.

In a Tuesday night statement emailed by Marisa Kaufman, spokesperson for the city’s Administration for Children’s Services, she clarified that students would continue receiving their Dorm Project stipends. (Some of the youth interviewed had been told otherwise.)

She also claimed the agency had the situation under control:

“Already, we have identified other living arrangements for a large majority of the students, including with relatives, friends and foster parents, and we will not rest until alternative housing is identified for the remaining students,” said the statement.*

Kaufman says Children’s Services was notified that the closure was coming earlier this week. Asked if there was a reason for the abrupt decision, following weeks of reassurance to the students, she referred questions about the decision-making process to CUNY.

“All of our CUNY Dorm students will have a safe place to live,” she wrote.

She recommended young people also consider applying for emergency grants from New Yorkers for Children. The nonprofit recently eased the requirements for transition-age foster youth to apply, and has launched a fundraising campaign to boost the number of youth they can provide with cash.

The campus upheaval comes as New York state aggressively ramps up its response to the coronavirus pandemic inundating city hospitals with patients. City University of New York has made dormitories available for use as medical facilities, but not at the Queens College facility where many Dorm Project participants reside. The news outlet The City reported earlier today that CUNY was moving students who had nowhere else to go to Queens College, where many foster youth resident have been asked to leave.

In an emailed statement, a spokesperson for the City University of New York, Frank Sobrino, said that:

“CUNY is doing all it can in the fight against the COVID-19 pandemic, including making dormitories available for use as medical facilities, as requested by the state. Students residing in these facilities who are unable to go home are being offered placement in a dormitory at Queens College, where they will continue receiving full services.”

Asked to clarify whether the offer of dorm placements applied to Dorm Project students — some of whom have been discharged from foster care, some of whom have not — Sobrino resent the same statement. He did not supply a requested explanation on why the Dorm Project youth, specifically, had been ordered to leave their dorms.

*UPDATE 3/26/2020: This section has been updated to reflect that Kaufman followed up to confirm homes have been identified for a large majority of foster youth.