From Beauty Salons to Foster Homes, Denise Goodman Explains How to Crack the Recruitment Code

Denise Goodman has been trying to figure out how to recruit foster parents for a long time.

“I once recruited a foster home for Moses,” she joked in an interview with The Imprint.

She’s actually been working in child welfare for more than 40 years, including 32 years understanding the art and science of foster parent recruitment and retention. (She’s also served as a foster parent herself.) Since 1992, she has worked as a consultant for the Annie E. Casey Foundation.

During the course of her career, Goodman has become a go-to source for recruitment tips. She’s helped many different jurisdictions across the country understand their recruitment needs and helped many of them create targeted recruitment campaigns.

In recent months, Goodman has been spending time in California to help counties in the state boost the number of homes as the state implements its Continuum of Care Reforms (CCR). Under CCR, the state is banking on finding more caregivers for the 60,000 children in its foster care system, with the goal of moving more children out of congregate care settings.

Goodman is also currently working on the CHAMPS campaign, the partnership between several funders — including the Annie E. Casey Foundation — and a long list of advocates and nonprofit organizations that hope to increase the number of quality foster homes in sites across the country.

In a recent conversation with The Imprint, Goodman shared why recruiting foster parents is so much different than it used to be, why most foster parent retention efforts go wrong and some unexpected places where recruiters should look for foster parents.

Has the work of foster parent recruitment changed a lot over the course of your career? This isn’t your grandma’s foster care anymore. First, the characteristics of the children have changed a lot. We’ve recognized that we have a lot of children who have been exposed to violence and whose parents have used substances.

Subsequently it’s created a lot of trauma in children and their needs, regardless of their age, are pretty substantial in terms of what they need from parents. It’s no longer “Do you have room for one more in your home,” setting another place at the dinner table; it’s “are you willing to invest in this child’s healing process.”

Nowadays, it’s also the expectation that you’re going to work toward reunification and getting these kids back home as soon as possible. Which means partnering with the child’s birth family to support them and assist with visitation and mentoring that parent so that child can return home as soon as possible. And that’s something that’s pretty different from what foster parents did a couple decades ago.

The second thing that’s changed has been that the nature of our population that we’re recruiting from has changed. Thirty years ago, we often had an at-home parent, and one parent went to work and consequently, being able to have someone there to receive an infant from the hospital or able to be involved in school. Now, with the greater number of two-parent working families and single-parent families, it’s made it harder for families to commit to being foster parents.

Placing sibling groups seems like a challenge for many agencies. What are some things they ought to think about when placing these types of children?

Part of [recruitment] is making people recognize in their own minds the nature of their own relationship with their brothers and sisters; it’s the longest relationship of their lives. Looking at how kids come into the child welfare system, if we separate them at the front door, they’re going to go out the back door, separated.

Another part is helping families know that we’ll be there to support them. “Gosh, taking three kids in, I could never afford that,” some people will say. But we can let families recognize that we might be able to provide monthly reimbursements, clothing, medical cards. So that some of the things that they may perceive as being barriers, we’ll be there to help and support with.

In places like San Francisco, housing is a great issue. They just don’t have the space to add a couple kids to their homes. So, we have to look to areas where a little more space might exist a little bit freely, but that’s bad news for families in San Francisco. This might mean tackling families where kids have left the nest.

When you look at the research, often times the people who take in a group of brothers and sisters, they often have a couple of kids themselves. They’ve been able to observe the nature of the relationship between their kids and how important it is. Yes, they’ll fuss and fight but they’ll have each others’ backs when push comes to shove. These foster parents see how important that is and they want to ensure that other kids won’t be separated.

There is a disproportionate number of African American children in the foster care system. How are these issues playing out with foster parent recruitment?

We really need a pool of foster parents that reflect the children in our care. Federal law — the Multiethnic Placement Act — kind of mandates us to do it.

We still haven’t gotten there for a number of reasons. One being that historically, communities of color have not been treated well by child welfare. They recognize that their children are taken at a higher rate. They recognize that their children aren’t getting permanency at the same rate as other kids. We just aren’t respectful and sensitive in dealing with those communities. I think part of it is we haven’t worked to build up relationships and we haven’t listened to them when they’ve talked to us.

Being able to get out there, pound the pavement and inform them about the numbers of children in care from their community versus the number of foster parents in that community, they’ll see that there’s a disconnect. If 80 percent of your kids are of color but only 30 percent of your foster parents are of color, we need to let the community know that. And that children are going far away from their homes.

Particularly for communities of color who haven’t been treated well, it’s a scary thing to call and sign up to volunteer [as a foster parent]. With families calling to be foster parents, they’re afraid they might take their own kids. We have to build trust, transparent, integrity, excellent customer service. We have to make it easier for the family to get through the approval process, not to make the worker’s job easier.

Can you talk about your work in Cleveland, where you found recruiters in an unlikely spot: beauty salons. 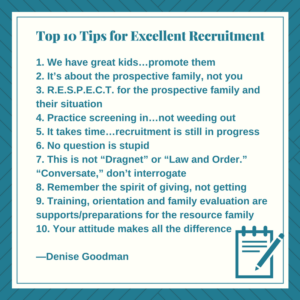 One challenge they put in their own way was that they were recruiting from the northern counties of Ohio. Once you get out of Cleveland, Cuyahoga County, the population tends to be a lot whiter. We were placing a lot of African American boys a couple hours away in farm country, with Amish foster parents.

I had to say to them, “You can’t do that anymore. I want you to stay right in this county or any county that touches us. Find families for these kids.”

In any community, it’s about identifying the informal hubs of the community where people come to swap stories and hang out. The families I worked with in Cleveland, through their own personal experiences, let me know how much time they spent at the barbershop or the beauty shop. “Wow,” we thought, “people are kind of held hostage there, we should get some information out there.”

But it’s not enough to just leave the information there; we wanted to stimulate the conversation. [That meant] being able to recruit barbershop owners and beauty salon owners and to meet with them and to teach them; getting them together for breakfast before their places opened, sharing with them the needs in the community and giving them some talking points and talking pictures of them cutting hair with some of our kids for [recruitment] posters.

They became our recruiters in the neighborhood, in the community. When people would come in, and would be spending a lot of hours there, they could be chatting it up and then they would be encouraging them. Then they said could we give them a discount. So then foster parents started bringing in their kids and that stimulated more conversations.

A lot of times, people want to keep themselves in little boxes with churches or schools, but there’s a lot of other places in the community where really great conversations go on. We’ve found that to be the beauty shops and barbershops in Cleveland.

Retention is often an under-acknowledged part of finding quality foster parents. How should agencies approach this aspect of the recruitment and retention process?

Ordinarily, the people who are doing the retention plan are the ones doing the approval process. So they’re planning social activities, appreciation banquets, maybe forming support groups. I think those are really important for our foster parents but the bigger piece that needs to happen is on the other side of the agency.

We need to have the child’s caseworker return phone calls to child’s foster parents as soon as possible. If I’m a foster parent and I have a concern about this child, I don’t want to wait two weeks for you to call me back. I need to hear back from you right now.

Also, there’s a lot of information that should be shared with foster parents at the time of placement … that isn’t. Workers have a false definition of what confidentiality means. If I’m taking a child in who was victimized in the bathroom, and I don’t know that, and the first thing I say to this child at 10 at night is why don’t you go upstairs to the bathroom, take your clothes off and take a bath? They’re going to be thinking, oh my God, they’re coming to hurt me.

Where if I knew that upfront, that that was the reason the child was removed, I could adjust my parenting to support the child. Information sharing is a really important one.

Also, inclusion: when there’s a court hearing coming up, I should be invited. If I can’t make it, you should get information from me. Now, we tend not to invite them. Or if they do come, they’re a silent partner, I’ve heard that a few times. Foster parents know the child the best.

Foster care is the most important service that we provide to the child. We have to value that, respect that, take care of that. Being responsive to foster parents to get them what they need to care for the child, whether it’s a tutor, therapy or a winter coat, whatever that is. Organizations need to find ways to be responsive when foster parents have needs in regards to themselves and the children.